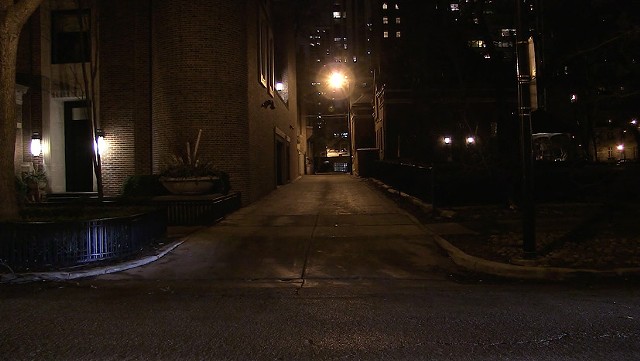 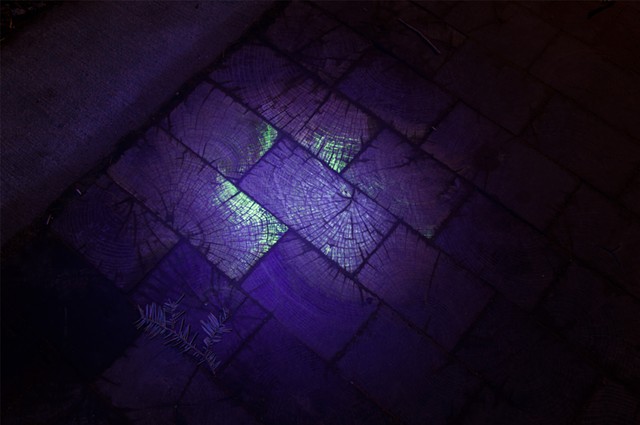 Inciting a latent fluorescence documents an act which is paradoxically both vandalism and architectural preservation. In the video, I visit an alley listed on the National Register of Historic Places. The alley received this designation because it is a rare extant example of end grain wood paving. A restoration in 2011 replaced most of the original creosote laden cedar pavers with a different wood, black locust, selected for its intrinsic hardness and rot resistance. Incidentally, black locust also fluoresces under ultraviolet light. During my nocturnal visit, I ablated the oxidation and soiling from a few pavers to reveal a photoreactive surface while taking care not to gouge or mar the actual pavers. This constitutes vandalism as I was granted no formal authority by the National Park Service. Yet it is a peculiar defacement exhibiting a conservational awareness and material dexterity incongruous with vandalism’s typically iconoclastic or indifferent demeanor. It follows core tenets of architectural preservation: removing soiling that will eventually induce rot, exacting no permanent damage, and it is reversible—the affected pavers have since re-oxidized and re-patinated such that they are indistinguishable from their neighbors. Inciting a latent fluorescence endeavors to simultaneously acknowledge the material culture of this early twentieth century infrastructure and wily engage some of the historically extraneous attributes introduced by the restoration. It models a historico-environmental disposition committed both to preservation and the enigmatic pleasures of alternate uses and interpretations that rote historicization often precludes.

Thanks to Alexandria Douziech, Kyung-jin Kim, and Portia Roy for their filming and staging support.